Hi everyone. Here comes part 2 of my weekend trip to Singapore last month (if you haven't read part 1 you can see it here). I went to DB Bistro Moderne for dinner before going to watch the Wicked musical at Marina Bay Sands and I had such a good meal that deserved its own blog post.

I have to apologize for the subpar photo quality because I didn't bring my camera so I was using my phone's camera and the lighting was quite dim but I didn't use flash. 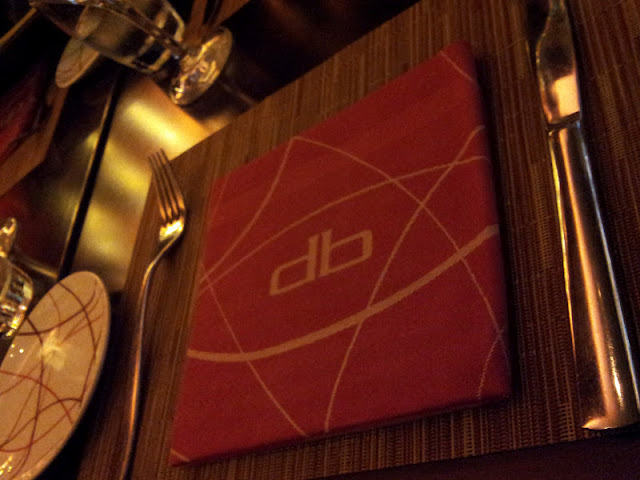 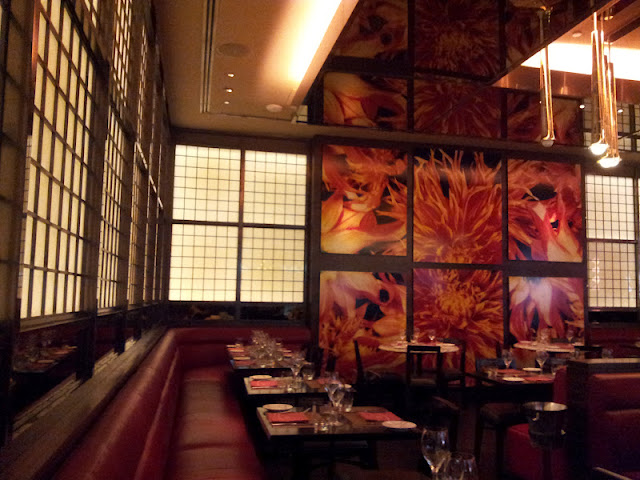 The musical was at 7.30pm so we were at the restaurant very early, which is better because I can snap this photo to show you the restaurant's decor without disturbing other people. 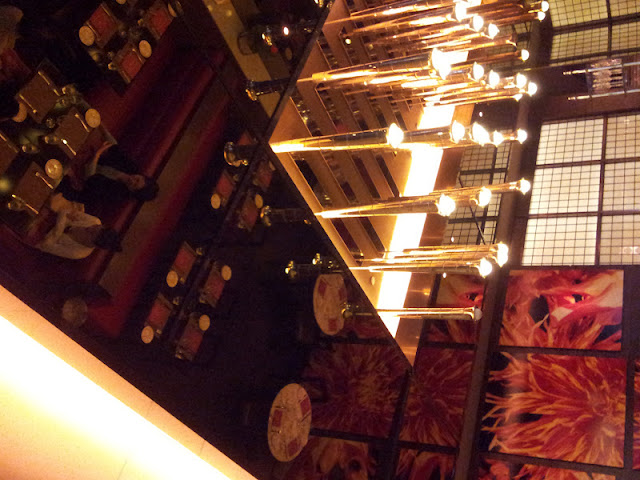 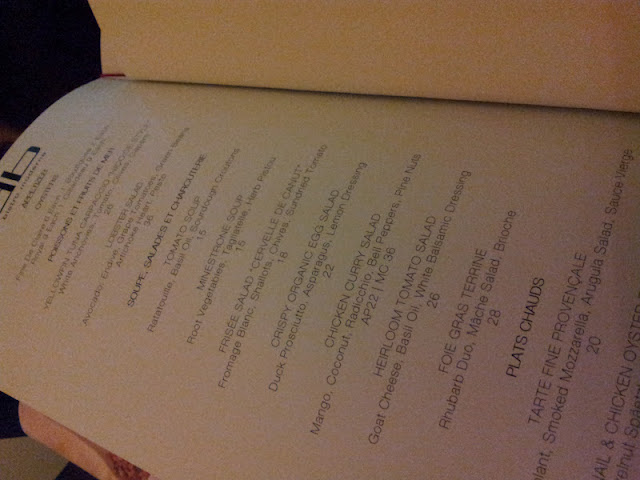 I had such a hard time deciding what I wanted to eat because everything on the menu looked so good! 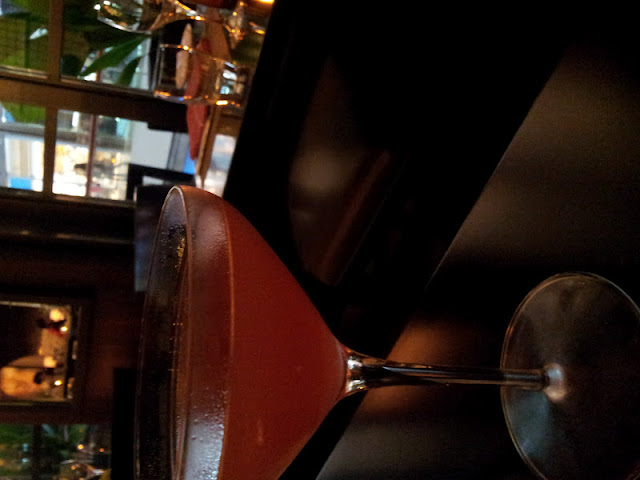 I forgot what cocktail this was... but it's pretty.

I made my siblings and sister-in-law to wait till I have taken photos of all the food before they can start eating so I can show you more dishes instead of just mine. We also tried each others food (so I can describe the dishes for you guys). 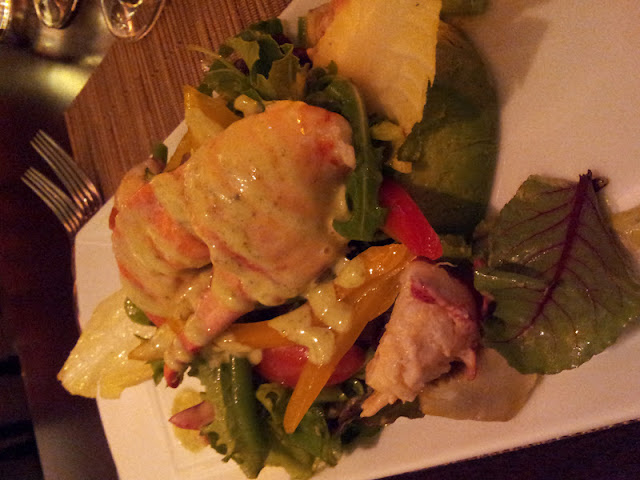 Lobster salad. The portion was so very generous: one whole claw plus some bits of meat. Lobster was perfectly cooked and paired with the creamy avocado and sharp arugula married by creamy dressing, it was so delicious. Loves!!! 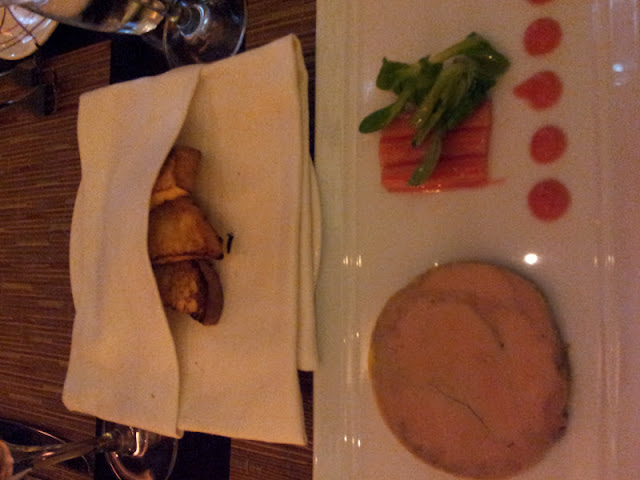 This was my dish, foie gras terrine with rhubarb compote served with toasted brioche. My brother tried this before and he told me to order this because he knew I was going to like it.
He does know me well!! The terrine was so smooth, rich and creamy. The compote added sweetness and sharpness that helped balance the dish and the toasted brioche was buttery and light. 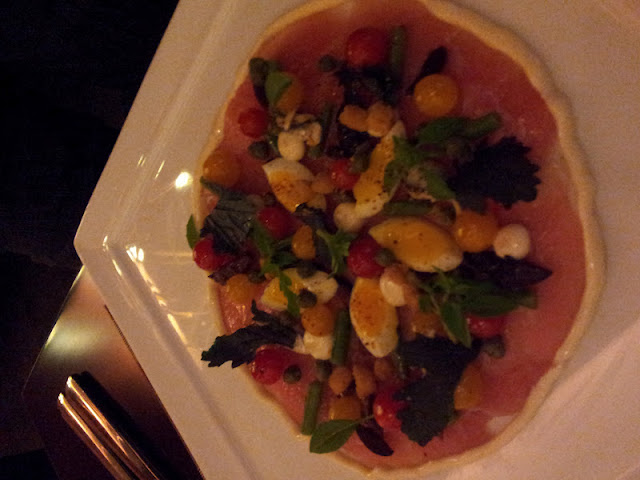 Nicoise style yellowfin carpaccio. This dish was so pretty and tasted just as good as it looks. Those baby tomatoes were packed very intense flavour and the carpaccio was well seasoned. Eaten in one bite with a little dressing and egg, it was a perfect bite with multitude layers of flavours and textures. 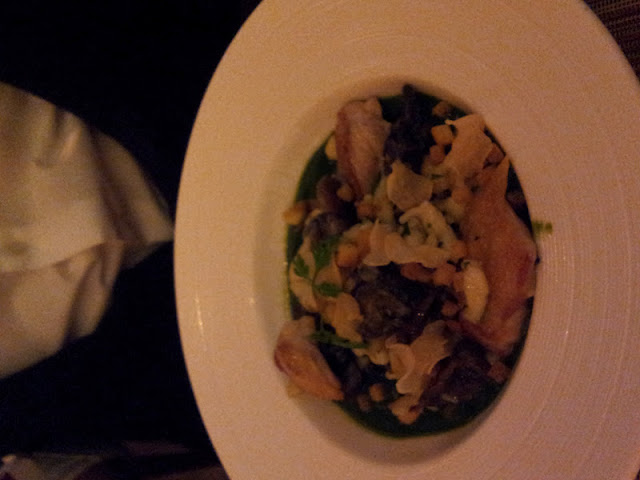 My brother ordered snail and chicken oyster fricasse. The spaetzel (rice shape pasta) was light and the chicken oyster were cooked so perfectly that it was crispy on the outside but incredibly tender on the inside. I didn't try the snails but apparently it's juicy and flavourful. 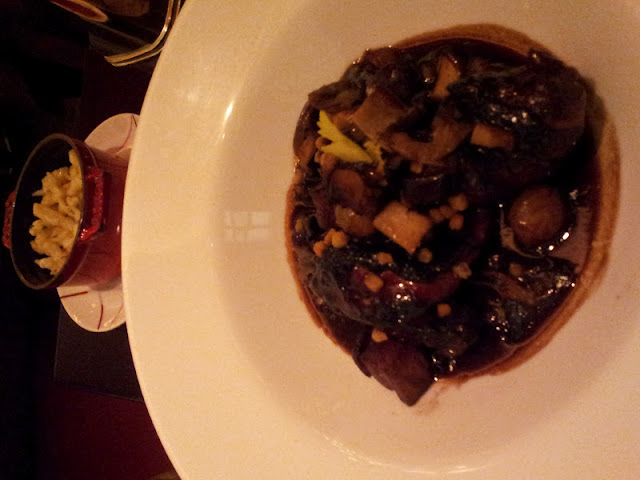 Coq au vin. I thought this was really good (even though I think for those who doesn't have a salty palate, it might be ever so slightly salty for you). The chicken was very tender and the dish was packed with so much flavour. Portion was very generous too. 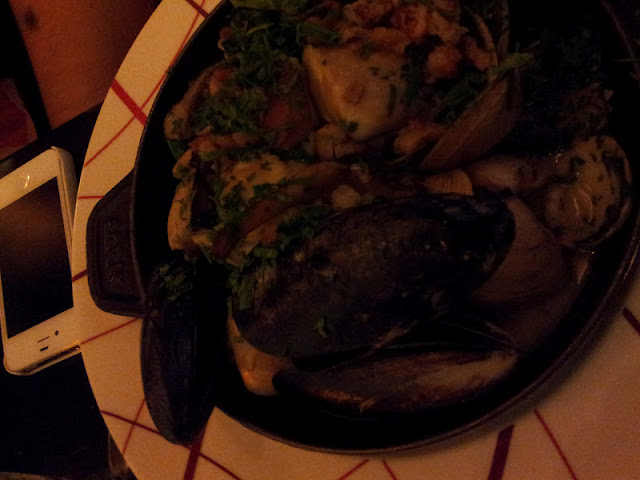 Forgot the name but it was basically a seafood stew. It was a simple white wine based broth with herbs but the seafood itself was so fresh and succulent that that was all it needed. Seafood was of course perfectly cooked and tender and all the savoury goodness of the seafood had permeated into the broth that I couldn't stop stealing. 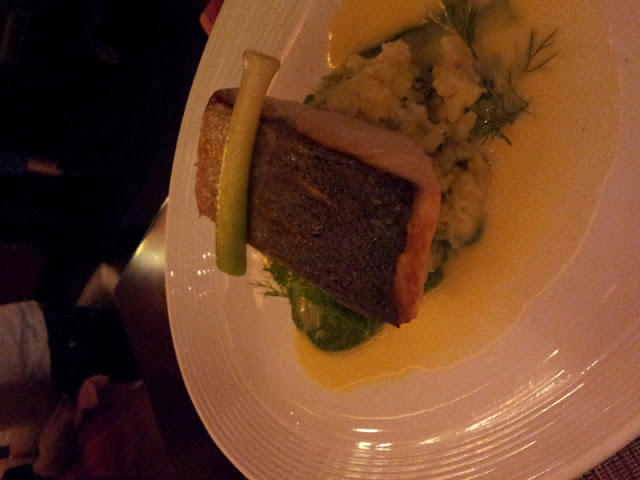 Pan-fried salmon with mash (again, forgot the exact name). I have to begin by saying that salmon might be a very common dish in loads of restaurant but so few actually cook it right. Some places overcook it so much that the fish was completely dry and flaky or some places don't cook it enough that the middle was still completely raw and sometimes even cold.
Not here!! The skin was crispy and the salmon fillet was PERFECTLY cooked. 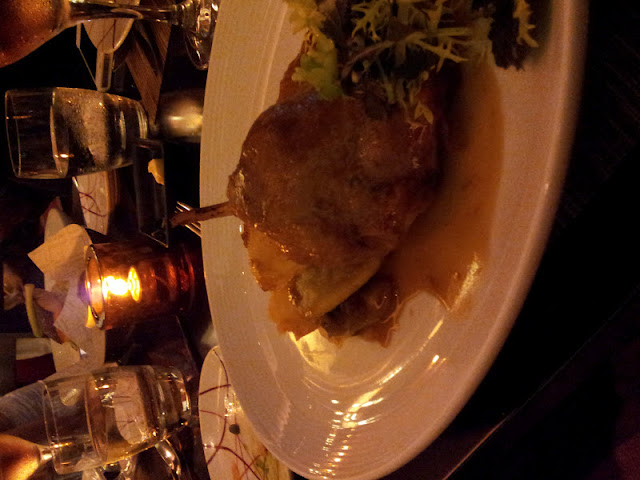 Duck confit. Duck is probably one of my favourite meats and I have quite high standard for it. And my conclusion was: I love this dish!! Fall off the bone meat with flavourful sauce clinging onto the meat and roasted potatoes with a side salad to cut the richness and add in some freshness and texture.

DESSERT
I think the perfect meal always have to end with a good dessert. So even though we were in a little rush, I insisted that we have to try some desserts. 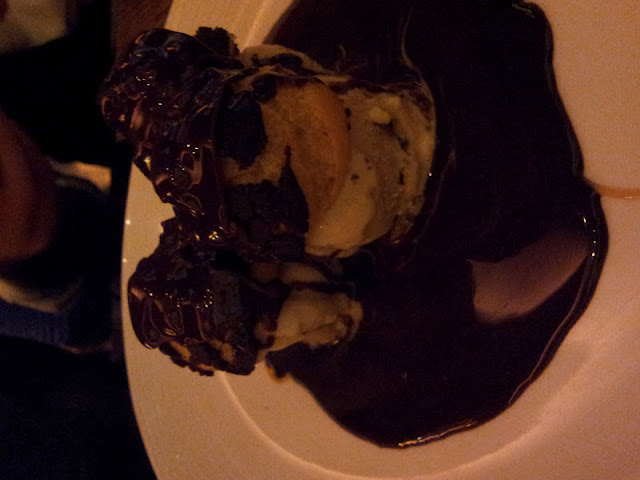 Rocky road ice cream filled profiteroles. The dish was first served with a chocolate disk on the profiteroles and the maitre'd  poured some chocolate sauce on it to melt the chocolate dish table side and it would end up looking like this.
I would highly recommend this dish if you don't like desserts that are too sweet. The chocolate sauce was very rich and smooth with bittersweet nodes. Ice cream was deliciously creamy with coffee and caramel-ly flavours. The choux pastry itself was also incredibly light. 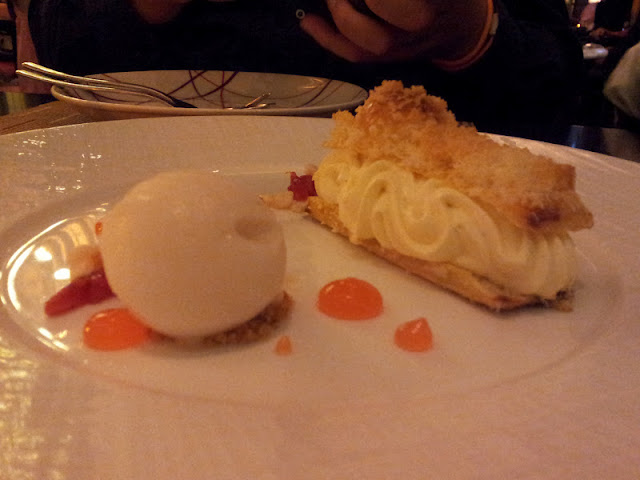 A tarte which name has escaped me yet again. What I do remember is that the lychee sorbet was fresh and delicious, the pastry was light with a slight florally fragrant and the cream filling was not too rich.

All in all I had a really great dining experience at DB Bistro Moderne. The food was excellent, the atmosphere was not too formal (restaurants that are too formal can sometimes can make me feel a little uncomfortable) and the service was amazing. I would definitely want to come back here if I visit Singapore again. 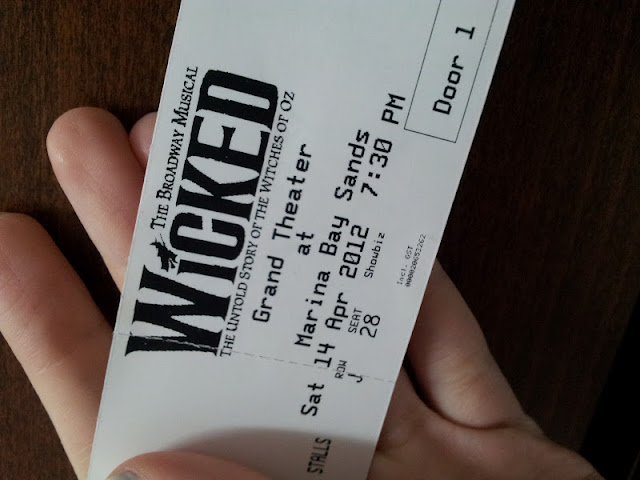 We had really good seats at the musical, which I thoroughly enjoyed. I adored the storyline because it was truly inspirational and I loved all the songs. Wicked is now my 2nd favourite musical of all times after May Poppins. I don't see how anything can beat supercalifragilisticexpialidocious. 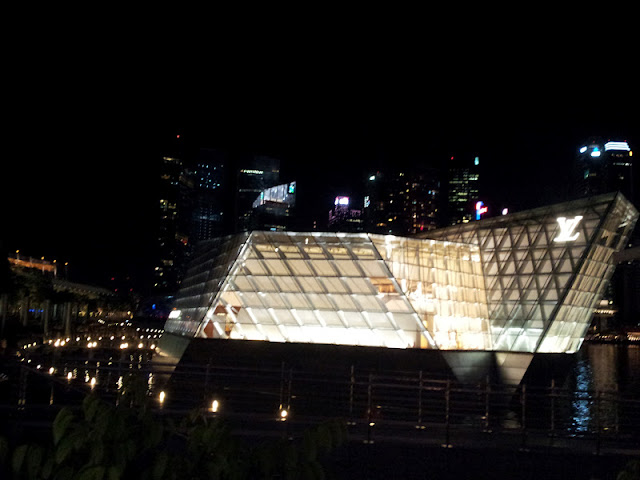 We went for a stroll outside after the musical while waiting for the water and light show to start. We spotted the majestic LV island (I was told it's a museum/ show room). It was so beautiful. 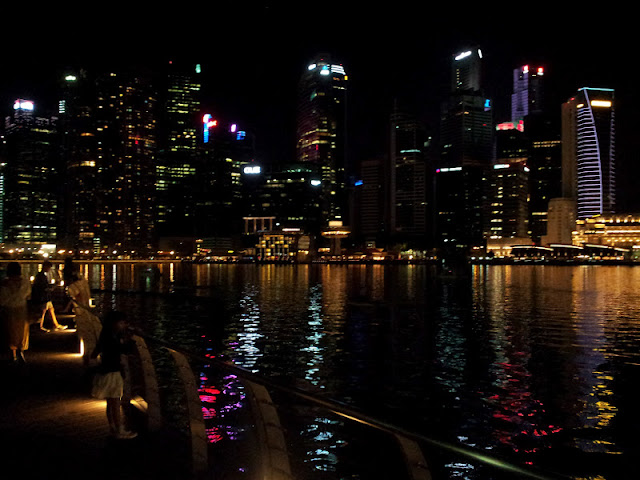 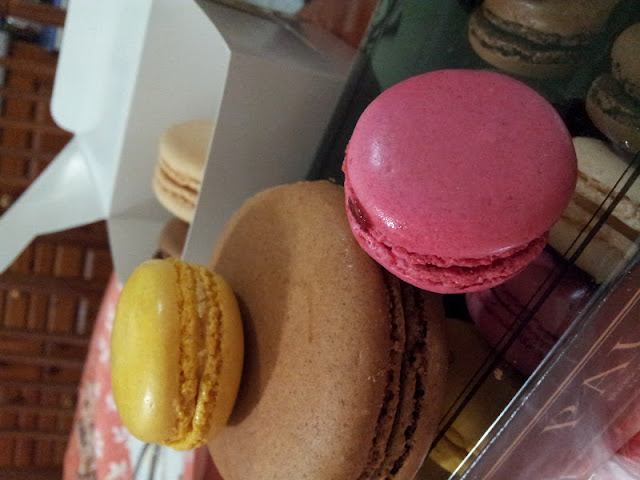 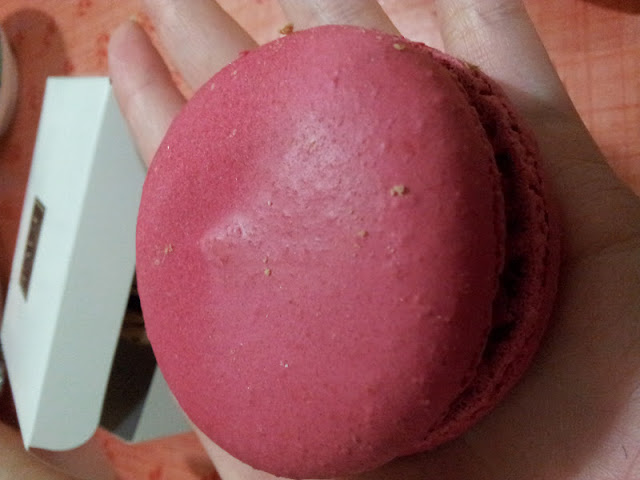 I have included a picture of these macaroons in my project 366 post here. Did you know that they were as big as my palm?

This is it from me this time. Please follow me on twitter at http://twitter.com/lizchewy and/or weibo http://www.weibo.com/lizchewy

Thank you so much for visiting my blog ♥

lizchewy
Kuala Lumpur, Malaysia
Just an ordinary person with an extraordinary love for makeup, skincare, fashion and food | Needs lots of sleep to function | Self confessed shopaholic | Speaks English, Mandarin, Cantonese, Malay, Korean & a little bit of Japanese | Drinks at least 5 cups of tea daily | Love to sing & dance but only when no one is watching | Favourite superhero is Captain America & The Hulk | Firmly believes in the mysterious force of Feng Tsui | Collects mugs & tumblers | Email: chewy.lizzo@gmail.com (enquiry only) Twitter: twitter.com/lizchewy Instagram: @lizchewy