Hi everyone. The title of this post is in fact very literal because this post is all about my weekend trip to Singapore with my siblings and sister-in-law in mid April to watch the Wicked musical. Since I mainly spent my time there shopping and eating, be warned that this is a very photo heavy and food-photo filled post.

We went to this Japanese restaurant called Tampopo for lunch after we arrived because my brother highly recommended this place. He said that this place serves delicious ramen, even more delicious Tonkatsu (breaded deep fried pork cutlet) and yummy Japanese desserts. Who can resist such a restaurant? Not me. 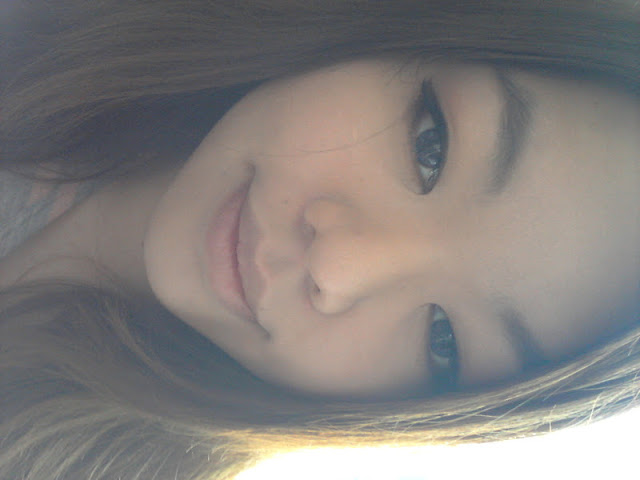 My makeup for the day. 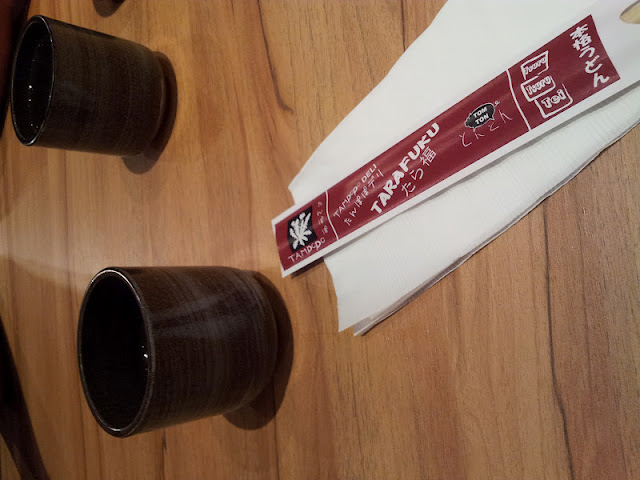 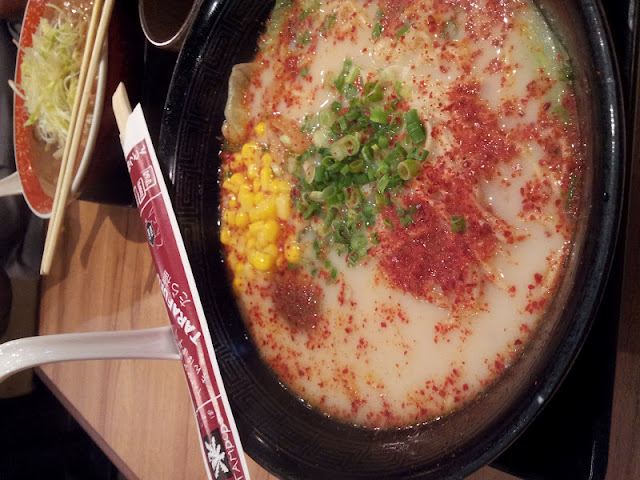 I forgot the name of this ramen but it was basically thin ramen noodles in pork bone soup base with shabu shabu pork slices, tasty? (marinated) half boiled egg, corn and various garnishes. I REMEMBER ONE OTHER IMPORTANT THING THOUGH, THIS WAS VERY VERY YUMMY!! 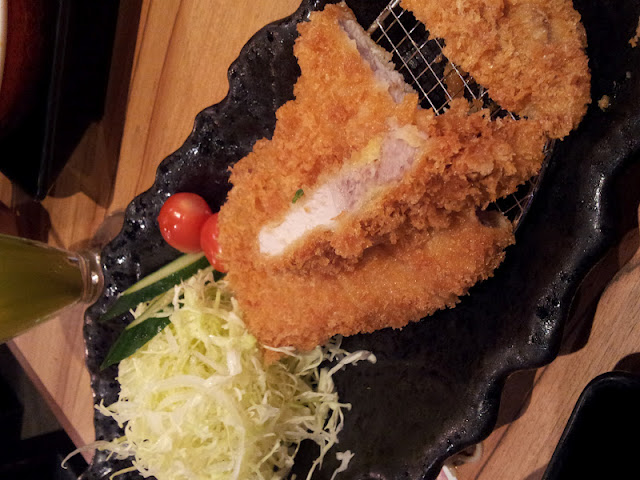 Kurobuta Tonkatsu. This was so tender and juicy. I have tried tonkatsu at many places but this was the best one that I have eaten in my life. 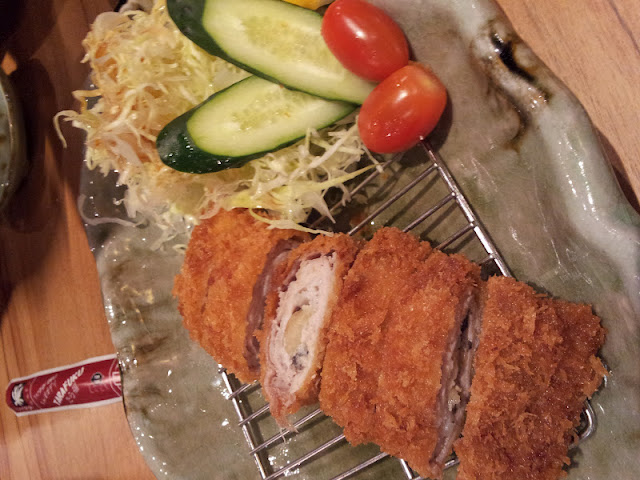 Foie Gras and Truffle Rorukatsu (Deep friend thinly sliced pork roll with foie gras and truffle). Probably one of the most guilty thing on the menu but just thinking about it right now is making my mouth water. 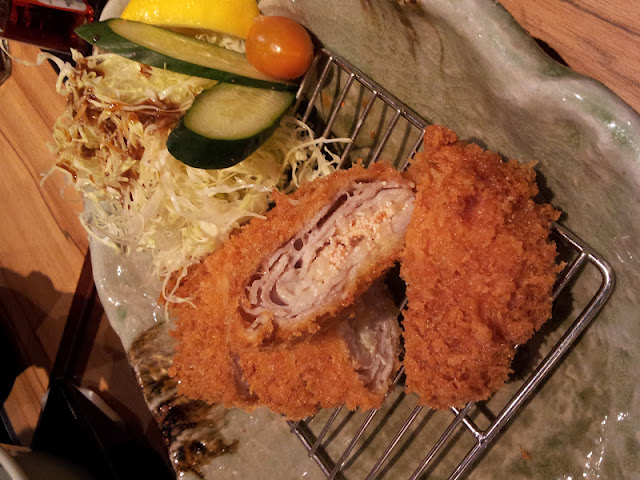 Mentaiko rorukatsu (Deep fried thinly sliced pork roll with pollock roe). The Mentaiko added a touch more saltiness and savoury flavour to the pork slices, which I loved.
Forgot to take picture of the delicious melt-in-your-mouth milk pudding because it was so delicious looking it was irresistible, it was that good.

Went to an Italian restaurant called Bella Pasta for dinner. We didn't make any reservations and it was a Friday night, so we walked up and down Robertson Quay and finally found this place. 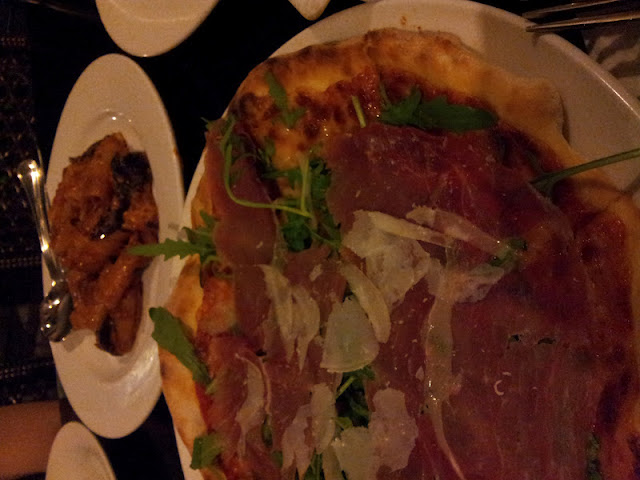 I think this was Parma ham pizza with shaved parmesan and arugula. The pizza base was very good, not too thick or hard, just slightly crispy on the outside and a little chewy on the inside. The sharp arugula balanced the saltiness of the ham and the tomato based just added the right amount of sweetness and slight sourness to the pizza. 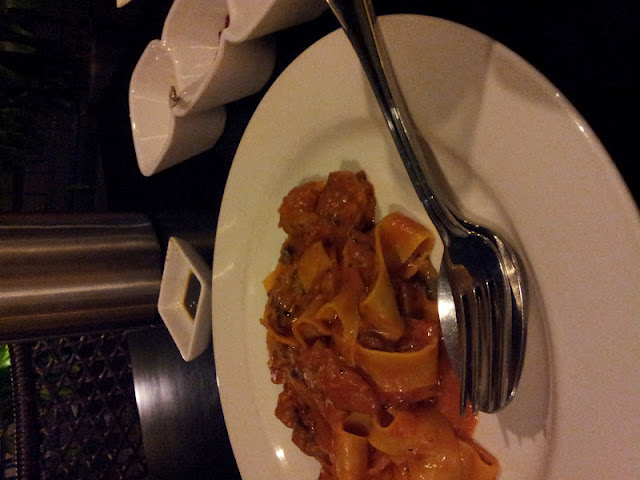 Parpadelle with mushrooms and Italian sausage (there was something else in it but I don't remember). The fresh pasta was silky and the sauce had great flavours. Mushrooms added lots of fragrance and earthiness and the Italian sausage was just perfect with herbs and meaty flavours.

We then went to Laurant Bernard Chocolatier for dessert (don't judge me, it was a holiday~~~) 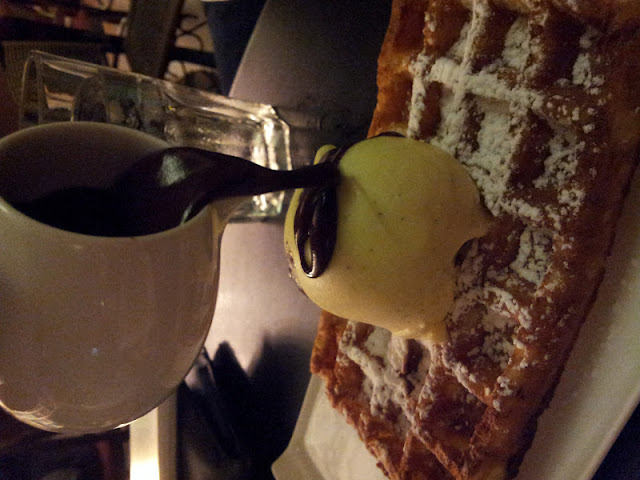 Belgian waffles with vanilla ice cream. This was not bad, the waffle was light and ice cream was creamy and packed with vanilla beans. The chocolate sauce was thick and rich. (But I have had better waffles than this so yeah....) 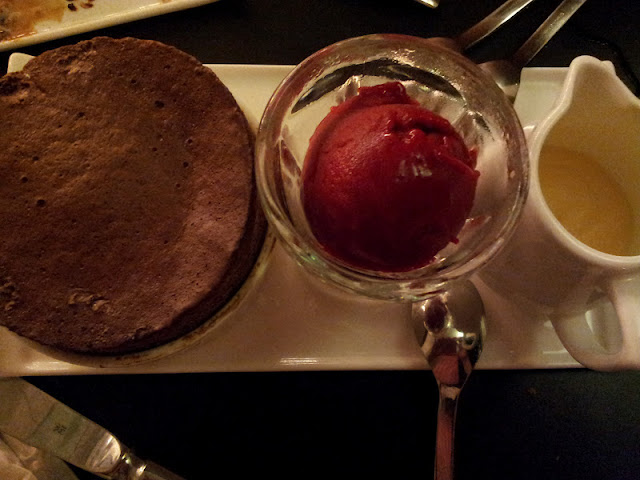 Chocolate souffle with raspberry sorbet and some cream sauce (I should really start jotting down notes because I keep forgetting bits of information). The chocolate souffle was very good. It was light and not too sweet with a rich chocolate flavour. The respberry souffle added a tanginess and sourness that helped cut the richness.

Went to Holland V for drinks with friends. 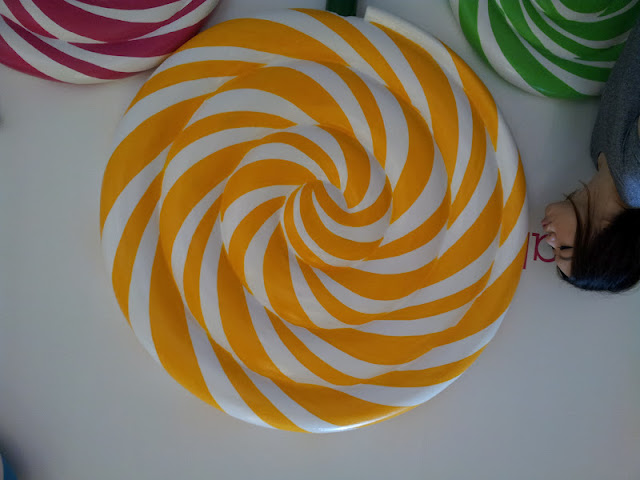 Shopping around Orchard. I was obviously in a very good mood. mwahhhhh~ 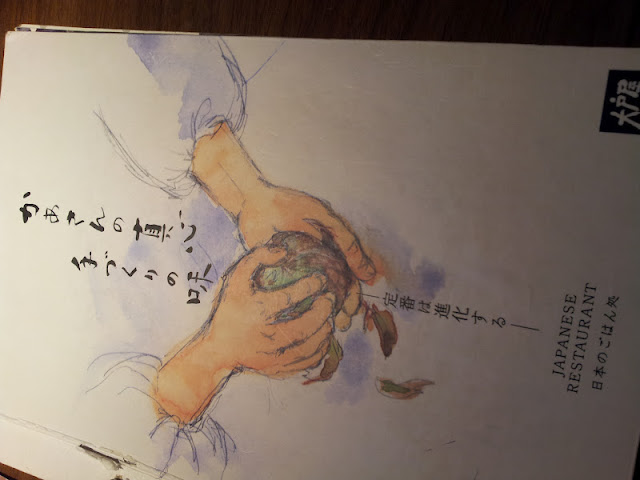 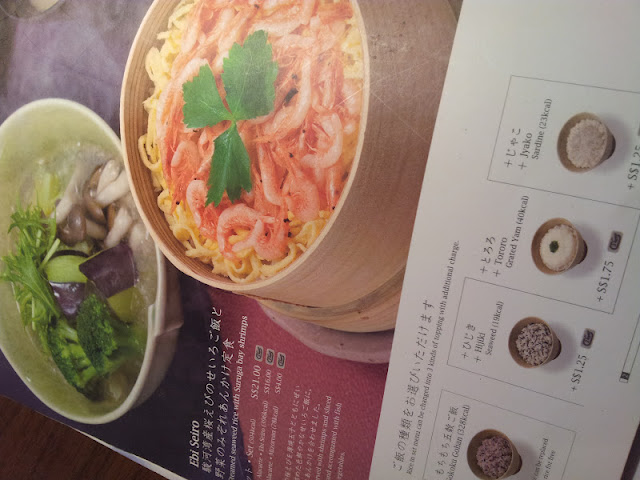 Went to a Japanese place for lunch in a feeble attempt to compensate for all the sinful meals I have had. This place is called Otoya and the calorie count for each item in the menu was listed. 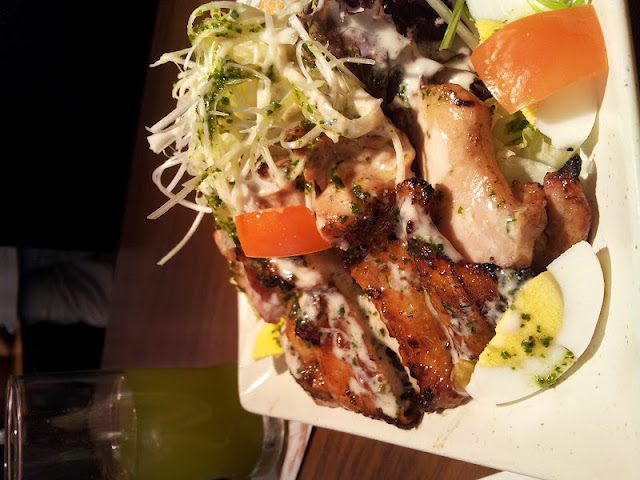 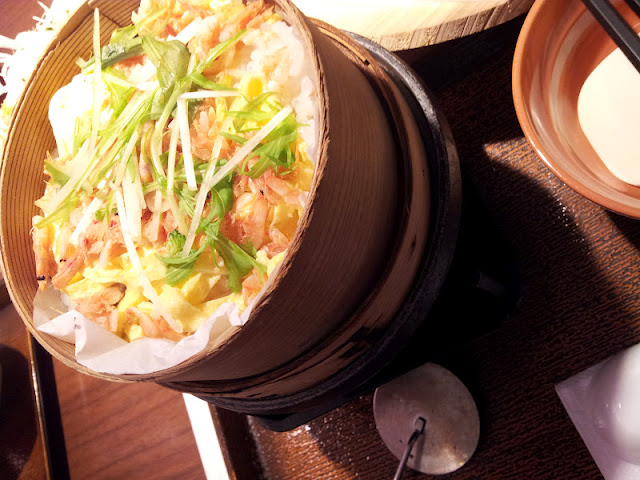 Sakura ebi on rice for me!! Any attempt of compensating for the guilty meals flew out of the window as we walked past Cold Stone Creamery. 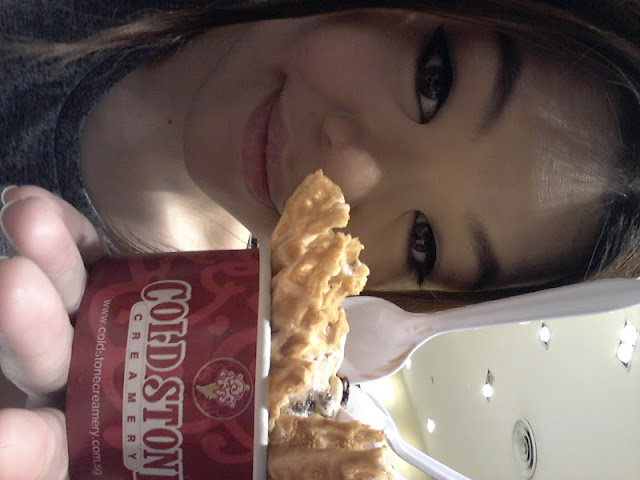 It was quite a fun experience really, watching them mix the ice cream in front of you, bouncing the ice cream off a spatula like a ball then tossing the ice cream and catching it so easily with the cup. And the ice cream was so delicious and creamy. I had the Owner's favourite flavour just in case you are curious.

I will post the rest of the pictures of this trip in a later post. Hint hint: I didn't take any pictures at the musical but I went to a very famous and incredible restaurant for dinner so stay tuned.

This is it from me this time. Please follow me on twitter at http://twitter.com/lizchewy and/or weibo http://www.weibo.com/lizchewy

Thank you so much for visiting my blog ♥

lizchewy
Kuala Lumpur, Malaysia
Just an ordinary person with an extraordinary love for makeup, skincare, fashion and food | Needs lots of sleep to function | Self confessed shopaholic | Speaks English, Mandarin, Cantonese, Malay, Korean & a little bit of Japanese | Drinks at least 5 cups of tea daily | Love to sing & dance but only when no one is watching | Favourite superhero is Captain America & The Hulk | Firmly believes in the mysterious force of Feng Tsui | Collects mugs & tumblers | Email: chewy.lizzo@gmail.com (enquiry only) Twitter: twitter.com/lizchewy Instagram: @lizchewy